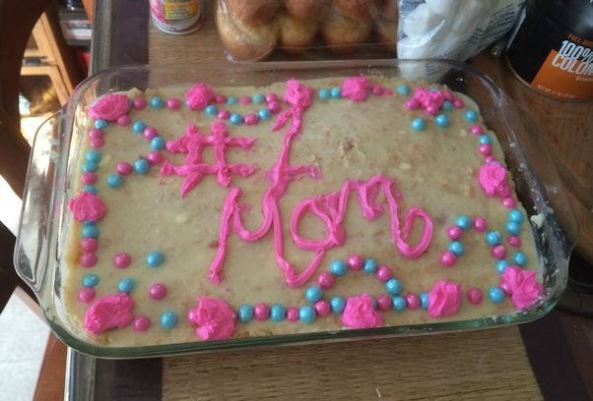 Let me tell you a little story. It goes something like this…

One day an ambitious woman decided to make her mother a four-layer cake (white with her favorite buttercream frosting) for a landmark birthday and surprise party . She even considered trying her hand at making frosting roses but had back-up decorations should she fail. Opportunity, yes…without pressure.

The woman baked the cakes the night before and allowed them to cool overnight, even made the frosting before she headed for bed and set her alarm for early morning to complete her mission. See – the woman had discovered years before that even though morning wasn’t her favorite time of day… early morning consistently proved to be a peaceful time that after a quick half-cup of coffee creative juices flowed and a deep zen-type focus would kick in. It’s the “riding the wave” under a muse’s smile and she was actually looking forward to the time. Looking forward to it so much she awoke several times discovering only an hour or two has passed before sighing and going back to sleep.  She rose 10 minutes before the alarm went off and eagerly went downstairs.

I’m glad in hindsight to report “Things did NOT go as planned.”

It was early morning, yes. Consumed half-cup of coffee, yes. Deep zen-type focus? No.  That elusive and intoxicating unicorn had been shooed away by two snarfy kitties and their on-going ‘Operational No-Growl to Peaceful Co-Existence. ‘ Their antics included one older “how dare you exist” cat attempting non-whole-heartedly to hold back some of her hisses and growls while the younger and clingier made a game of being underfoot and practicing world-champion styled  “rub at the human’s legs.”

Not a big deal.  The woman had often dealt with interruptions and adversity before. The key, she decided, was to refrain from many lower body movements. She smiled to herself. Problem solved. Now to deep focus.

Can’t have that. Nudge it back. Top layer iced. Okay. Frost the side and….

A piece of the bottom layer crumbled.

Dang it…well, that can be hid under the frosting. Slides again..

No, no!  Nudge it back. Okay…. Wish this cat would go away. Don’t think about that.  Focus. Focus. Breathe. Okay. We’ll grab more frosting and …. The cake slides again.

Damn it. Stop. Nudge. Nudge. Hmmmm…. Do I have toothpicks? Would someone accidentally bite into a toothpick?  I could…

The woman pushed the cat away with a foot. Cat came back. Pushes away. Comes back. Sigh. Doesn’t matter.  Maybe if I  nudge the cake more than necessary the other way and when I frost the opposite side… Oh good…Good… This is going to work.

The muse creeps into the room, taps the woman on the cheek and whispers “Open your eyes. Your cake looks like the leaning Tower of Pisa.”

Sigh. She nudges the cat away. Let’s see…I can… Cat comes comes back with an extra exuberant rubbing.

“Will you get away from me!” The woman snaps and pushes cat away with the top of her foot.  Cat comes back. “GET.”

The cat looks at her incredulously.

Both cats bolt. The woman turns back to her project and takes a deep breathe, and another. Okay… How to deal with this and…

The top layer cracks…. Maybe I could hide that under frosting and… The crack ripples deeper in defiance it would seem of solution. Maybe I could make a Mt. Vesuvius cake? Mt Vesuviuos. How would I decorate for that? Not really appropriate for a birthday cake.

The woman frowns. Sits  in front of the cake. The thing mocks her with another rippling crack. I could just buy a store-bought cake. She reaches for the bowl for a taste of the perfect frosting. She closes her eyes.  Damn it. This is too good to throw out. Cake pops? Cake pops. I’d need a lot of chocolate and sticks. The woman glances at the clock. No, not enough time for a store trip let alone make them. It’s hopeless.

It is here that a voice from the past knocks aside the mocking muse. The voice is her mother’s and the message is an old adage repeated past counting. “Necessity is the mother of invention.”

Well, I could get out a casserole pan and make one really huge cake pop. Hmmmm….

And voilà! The invention of the Casserole Cake arrived into the world.

[As to the fruit dip: Dig into pantry until you find left-over black wafers of white chocolate from an earlier project. As black colored fruit dip is not appropriate for a mom’s landmark birthday add strong tint of rose to the cream cheese and yogurt part before adding melted chocolate. The color will be transformed into … dusty-dark lilac purple color. Yes! Do-able. Yay!]

The woman also bought store-bought cake as well for the candle blowing out ceremony because who knew if the disaster would turn into a decades old telling like the infamous Thanksgiving chocolate pies ….BUT the consensus for  Casserole Cake? “Yummy!  When are you making it again? Can I have another serving?”

Added bonus? The woman had a nice story to convey to her mother of how one of the life-lesson learned at her mother’s knee still benefits her to this day.

Oh, and the young kitty-cat? Still as affectionate as ever…but slightly less underfoot.

Happy Birthday Mom! I love you!

I write YA (young adult) fantasy adventure, plus a few other things when it gets too noisy in my head. I've had 300+ articles published from daily newspaper to state-wide and regional magazines and national intranet media. Please feel free to check out some of my articles at https://deirsprite.contently.com/

Warden of Words // Shaper of Stories

The Casual Way to Discuss Movies

saracroethle.wordpress.com/
Thoughts of the Fallen

A collection of nonsensical words thrown together

A blog full of humorous and poignant observations.

Living life one day at a time!

Life, art, bad cooking and all things boring or not

The adventures of a chick with a stick

Little Flecks of Inspiration and Creativity

For lovers of reading, writing, books

”Writing is nothing more than a guided dream” -Jorge Luis Borges

“If you want to be a writer, you must do two things above all others: read a lot and write a lot.”

this is... The Neighborhood

the Story within the Story

4 out of 5 dentists recommend this WordPress.com site

Service Industry Stories and More Since 2012